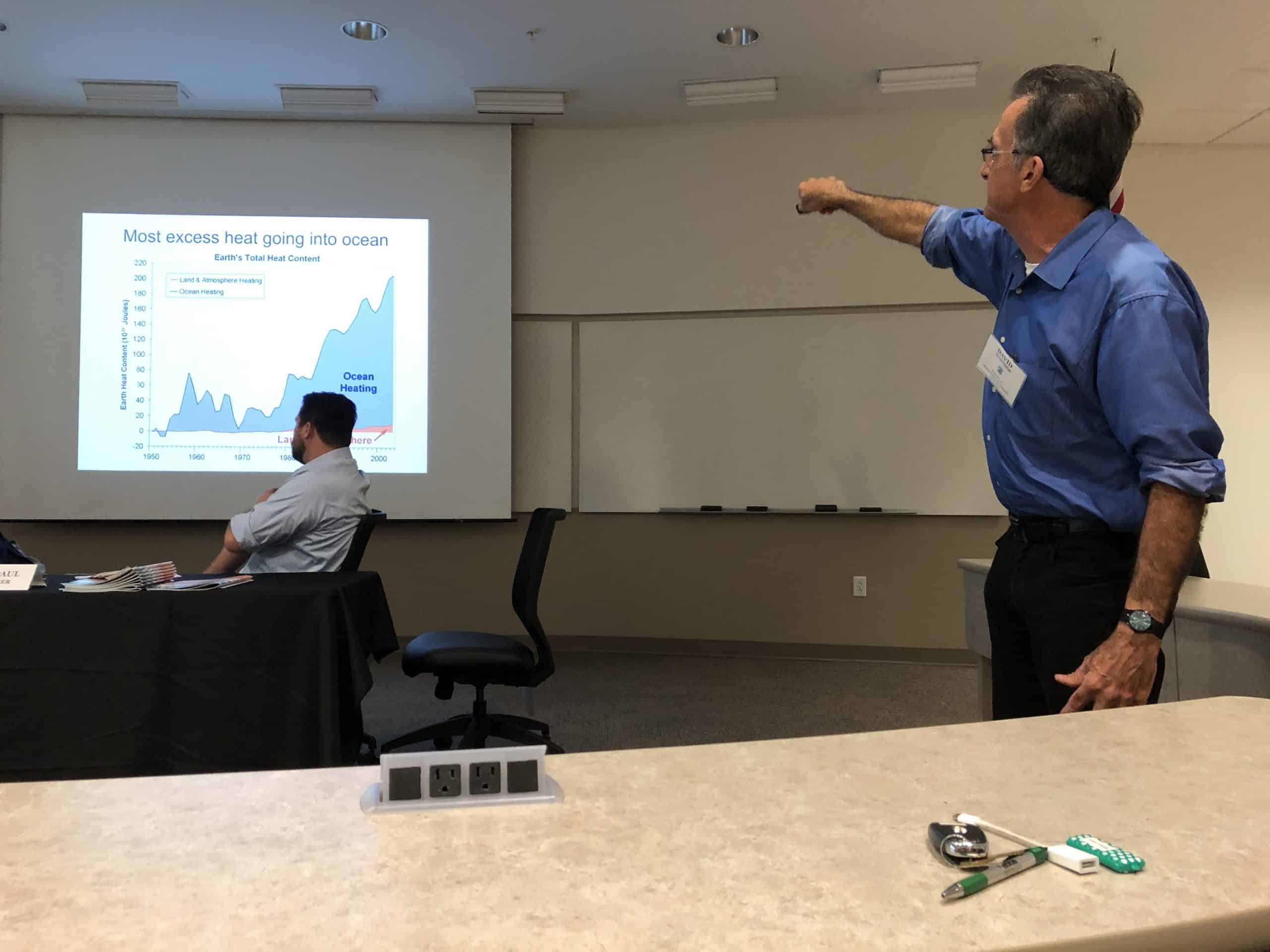 “It’s easy to ignore the reports that come from respected sources like the federal government or IPCC when they’re looking ahead to catastrophic events in 2100,” says David Hastings, retired Eckerd College professor. “I don’t know about you, but I’m not likely to be alive in 2100. And while it’s not as far off as people think – the babies born this year and their children will certainly see 2100 – it’s hard to think that far ahead. Especially in this crisis-riddled environment. But there are real-life, real-time consequences to letting climate change proceed  unchecked.”

And where can you see these consequences? “All around us,” says David Hastings, retired Eckerd College professor. “But specifically and especially in Florida. You can see the beginnings of the effects now. But in the next decade or two, they will be indisputable and devastating.”

As a result of unprecedented levels of ice melting into the ocean, sea levels are predicted to rise an average of eight to twelve and even eighteen inches by 2040. This makes coastal flooding a much more frequent possibility. “Research from Resources for the Future indicates that previously known “100-year-floods” will potentially begin to hit St. Petersburg every few years instead of every century. That’s a lot of water damage and homes lost and hospitals closed and possibly lives lost,” says David Hastings, retired Eckerd professor of environmental science.

Across Florida, it is predicted that serious flooding endangers 4 hospitals, 30 schools, 2,500 miles of road and highway, and over 300,000 homes. “Eight to twelve inches doesn’t sound like a lot because it’s barely knee high on most people,” says David Hastings, retired Eckerd professor. “But you have to remember that sea level alone isn’t the problem. It’s the extreme rainfall and hurricanes – which are also increasing in strength due to climate change. An extra foot of water can be the difference between a flooded basement and a completely destroyed home.”

Other than deaths caused by increased flooding, more severe hurricanes, and other natural disasters, climate change can contribute to the mortality risk across Florida in another unexpected way.

“While we normally think about more general health impacts due to climate changes, we need to consider climate-driven impacts on mortality, as well” according to Dr. David Hastings, retired Eckerd College professor.  “Over the next two decades, higher temperatures are predicted across the globe,” says Dr.  David Hastings. Higher temperatures mean more heatstroke, to which the very young and the very elderly are much more susceptible. There is also predicted to be an increase of 1,000 deaths per year in Florida alone due to increased cardiovascular and cerebrovascular disease complications. Both types of diseases are exacerbated by extreme temperatures.

“Smart public policy and preparation are the only answers to these challenges,” says David Hastings retired Eckerd College professor and policy expert. “We have to educate people. Ten to twenty years isn’t very long to implement and fund the infrastructure changes we’ll need to make to avoid disaster.”